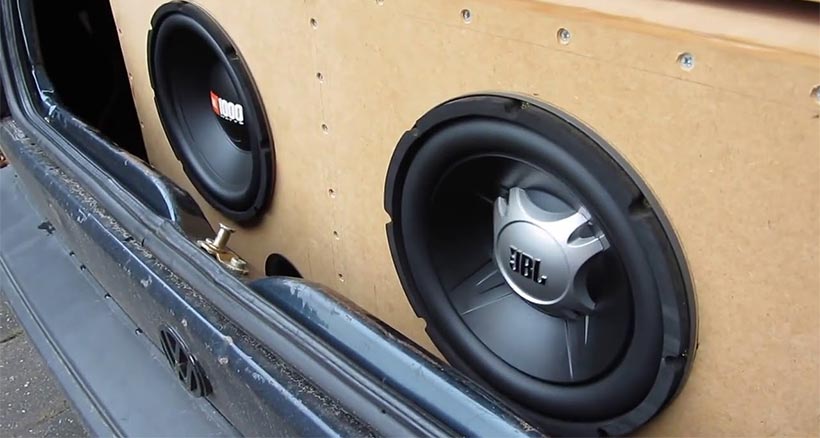 The blown speaker is an umbrella term we use for a speaker that’s not working the way it should. It’s identified by relatively lower sound (even at higher volumes), low bass production, and hissing in the sound.

Whether you can fix a blown speaker or not depends on how much damaged it is. If it’s too damaged, then it’s not worth the hassle, and you should get a new 3rd-party speaker.

But if it’s only slightly damaged or you have a tight budget, you can follow the steps below and try to fix it on your own.

How To Fix A Blown Car Speaker

The most common causes of blown speakers are torn/damaged cone and/or melted voice coil. So here we’ll replace both of these components.

First, we’ll have to remove the speaker itself. Before doing anything else, disconnect the cable from the battery terminals as the electric charge can be present.

After this, remove the mounting screws through a ratchet or a screwdriver and open up the enclosure. Pull each speaker unit out and disconnect it from the rear.

Some older models may have soldered wiring instead of a connection plug. If that is the case, you’ll have to cut the wires from the speaker’s base.

To remove the surround, we’ll use a knife. Stab the knife into the old foam surround, making a hole. After this, you can either use scissors or your hands to cut/tear the surround.

Both approaches are fine, but I’ll recommend scissors as it’s comparatively easier and quicker. Not to forget about the precise cut you’ll get through scissors.

3. Take off the Cone, Voice Coil, and Old Glue

Again, we’ll use the knife to remove the speaker cone and voice coil, and scour the old glue through the knife’s back or sandpaper.

But before removing the voice coil, make sure that terminal wires are disconnected. The first two tasks are fairly easy but removing the old glue may take some time.

Now we’ll remove the dust that has accumulated on the speaker with time. We’ll use soft cloth here as the speaker can get damaged otherwise.

Put some amount of alcohol on the cloth and wipe the speaker with light hands. This will remove the dirt from most of the speaker. For hard to reach areas, you may need a compressed air cleaner.

Here we’ll put a new voice coil where the older one was before.

Put some glue on the new cone and place it on the voice coil. Wait for some time to let this glue dry.

Again, put some glue and place the new surround where the older one was before. Again, you’ll have to wait a few minutes to let the glue dry.

8. Reinstall the Fixed Speaker in your car

Now we’ll plug this speaker back, connect all the cables, and put the screws back.

Now it’s time to find out whether this whole procedure worked or not. Test the speaker at low volume first. And then gradually increase the level.

If there’s some decrease in distortion or increase in bass production, it means you’re good to go.

If not, it means that the speaker is too damaged for quick fixes, and you’ll have to replace it altogether.

How To Know If Your Speaker Is Blown

I recently wrote a post about how to tell if your speaker is blown. There I’ve mentioned several methods to detect a blown speaker, and you can check that out by clicking on that link.

While I won’t repeat the same stuff here, the common signs of blown speakers are lack of vibrations, lack of bass production, and sound distortion.

Why A Speaker Blows

There are many reasons why this happens, such as inferior material, clipping, ageing, careless installation, etc. But the most common of them are mechanical and thermal failures.

Mechanical failure happens when the speaker cone is forced to move in a way it wasn’t designed for in the first place. The further the cone moves, the more it stresses, causing itself to break, tear or loose.

Thus, it would help if you don’t turn up the volume high all the time.

On the other hand, thermal failure happens when the speaker receives more power than it was designed for.

When this happens continuously for a long time, the excessive power causes the heat to buildup and lose the glue that holds the components together.