No matter how well-built a vehicle is, there are a lot of areas we (owners) like to modify.

It’s probably the most popular full-sized pickup truck of all time and known for its value for money. The common upgrades you can do in your F150 are the tires, bed cover, seat covers, and antenna.

You would need to upgrade to an aftermarket antenna if the factory unit is broken or is slowly dying. The 2nd part is more common as factory antennas need to be replaced after 5-6 years in use. But this duration can be shorter if you live around the ocean as the sea breeze can accelerate the corrosion in its internal parts.

Whatever the reason, you get two options within 3rd-party antennas: standard/long antennas and short antennas.

While Longer antennas provide better coverage, they are prone to damage during windy weather. Their extra length makes them swing back and forth against the wind and break down eventually.

Alternatively, you can get a short antenna. Not only are aftermarket short antennas more thick and sturdy, but they also look more aesthetically pleasing than common factory antennas.

In this post, we’ll talk about the four best short antennas compatible with F150. 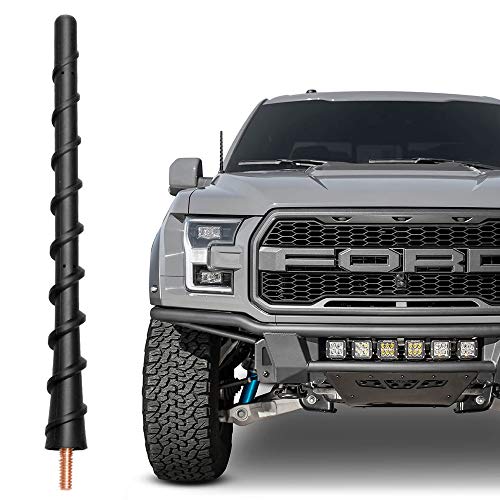 The first antenna we have is from VOFONO.

Its exterior consists of matte-black premium rubber to make the antenna flexible. As far as the durability is concerned, VOFONO has stated that the antenna will not get damaged during car washes whether they’re manual or automatic.

The extra length and the copper coils inside give VOFONO antenna an above-average reception for both FM and AM stations. Yes, it still can’t be compared with the stock antenna, but that’s the case with every short antenna in the market.

Coming at less than 20 bucks, this is probably the best band for buck antenna for your F150.

With only 3.2 inches in length, CravenSpeed Stubby is arguably the shortest antenna compatible with the F150.

It’s made up of billet aluminum which makes it pretty tough. The building material, along with the corrosion-resistant stainless steel threads, ensures that it’ll last for a long time.

On top of it, there’s a scratch-resistant black powder coating. But I’d still advise you to remove the antenna before carwashes if you do them frequently.

In my experience with this antenna, the FM radio signals were crystal clear, but there was little static from the AM stations in certain areas.

But that’s reasonable for such a small-sized antenna. CraveSpeed has a pretty fair return policy and you can easily get a refund if not satisfied with the signal reception.

Some people have complained that the coating chips off when you install the antenna using a tool. Therefore, you’ll have to be careful in this regard. I would recommend installing it with bare hands anyway, as it’s quick and easier. 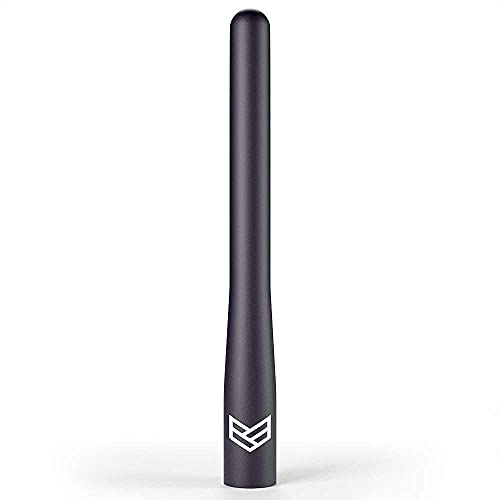 The next antenna we have is the RONIN antenna.

It’s 4 inches long, made up of aluminum, and has a scratch-resistant anodized matte-black finish.

One big thing I like about this antenna is the ease of installation. All you need to do is remove the factory antenna with a wrench.

After this, you can simply screw the new antenna with your hands. It comes with a pre-applied compound at its base to reduce the risk of theft. That being said, you may find it a little harder to uninstall later. This whole process shouldn’t take more than two minutes of you.

On the other hand, my main concern with this antenna is the signal reception. It’s not entirely bad but rather depends on the area where you live.

In a city with a lot of stations, you will get decent signals. But in rural areas where the stations will be very few, the signal quality will degrade. 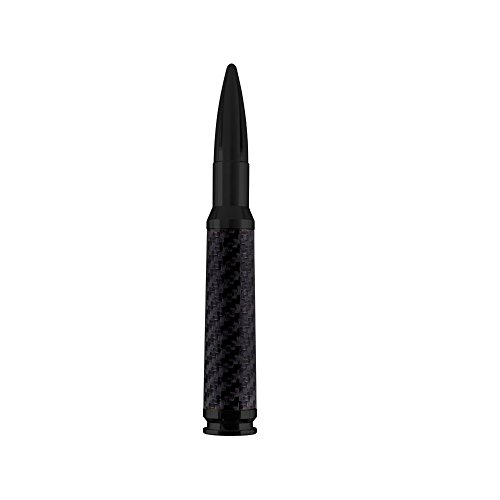 The last antenna on our list is AntennaX 50 Cal Black Bullet Ammo.

The one major thing that differentiates it from other antennas is its bullet-shaped design.

Yes, this antenna looks like a 5.5-inch bullet attached to your F150 and gives your vehicle a little aggressive look.

It’s made up of billet aluminum, like the CravenSpeed antenna, and has an anodized black finish to be scratch-resistant. The aluminum, while making the antenna stronger, also makes it inflexible. So I won’t recommend it if you do a lot of off-roading.

As far as the reception is concerned, you get a decent amount of reception if you live in or close to a city.

Another thing I liked about this antenna is the extra compatibility as it supports all F150 models from 1998 to 2022. The installation is straightforward but takes some extra time.

Things to Look for in a Car Antenna

Below are some key points you should consider when upgrading your car antenna.

Not so long ago, car antenna was only available in large sizes. But thanks to ever-improving technological advancements, short antennas are more popular nowadays.

While it was true to some extent in older models, modern shirt antennas come with an above-average area coverage, and you get decent reception if a radio station is located within a 30-40 miles radius of your vehicle.

There are two antenna types in terms of design: Mast ad Bullet antennas.

Mast-style antennas were the main choice in older vehicles but bullet antennas are more common these days due to their sturdier build.

Bullet antennas are further divided into active and passive antennas. The main difference between them is that active antennas come with a built-in amplifier to boost their signal reception.

The most plausible reason why you’re looking for an aftermarket antenna is that the factory antenna is either not working or broken. That is why you should check the durability of the antenna you’re going to buy.

For this, you’ll have to go through the specs sheet and check the building material of the new antenna. The most common materials used in 3rd-party antennas are rubber, plastic, stainless steel, and aluminum.

You should be able to install a car antenna at home within 5-10 minutes, and with basic tools only. Anything more than that means it’s just poorly designed. What is the Big 3 Upgrade in Car Audio? How to Install a Line Output Converter