While coaxial speakers have a woofer and tweeter (or woofer, tweeter, and midrange in 3-way speakers) combined into a single unit, the component speakers set have these speakers physically separated from each other.

The main benefits of such speakers are the modular design, customization, better soundstage, and better sound quality overall.

But how do you ensure that each type of frequency is sent to the relevant speaker?

Sending the wrong frequency to a speaker will not only cause sound distortion but also blow that speaker in many cases.

To solve this problem, you’ll need a crossover.

It’s a device that filters unwanted frequencies from an audio signal before sending the remaining signal to a relevant speaker. It does that with the help of two built-in components called high-pass filter and low-pass filter.

A high-pass filter only allows frequencies above a particular frequency number (also called cut-off frequency) to pass through to a speaker.

A Low-pass filter does exactly opposite of a high-pass filter. It only allows frequencies below a particular frequency number to pass through to a speaker.

In this post, we’ll discuss five of the best crossover for car audio in 2022. 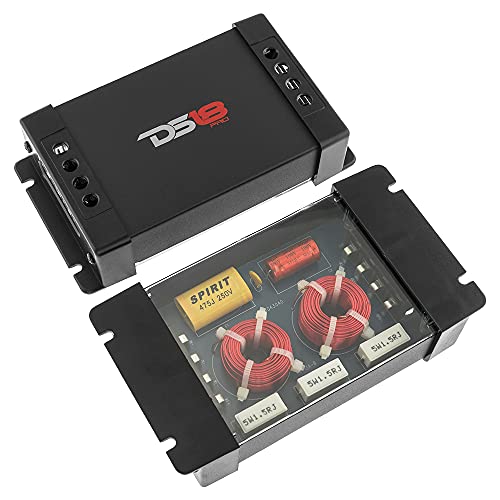 The first crossover in this list is the Pro-CFX by DS18.

It’s a 2-way passive crossover that is super easy to install and does its job efficiently.

Yes, it does feel a little expensive for a passive speaker at first. That’s when you realize that you get two of them out of the box. The pair form makes the Pro-CFX suitable for any standard 4-speaker setup (2 tweeters + 2 woofers).

It’s quite simple in terms of design. You get an all-black color scheme with the DS18 logo on top and some connectors on the front and backside.

The other side is interesting because of four connectors for just the tweeter (instead of two). While TW – is where we’ll connect the negative wire, the positive wire will be connected to any one of 0dB, -3dB, and -6dB connectors – depending on how louder you want your tweeters to be.

At any volume, tweeters are generally louder than the rest of your system. Using these ‘dB’ connectors, the Pro-CFX will attenuate the power going to the tweeter and solve this issue.

At 0dB, there’s no attenuation, and full power is sent to the tweeter. At -3dB, you’ll get half of the power; at -6dB, it’ll reduce by half again (shrink to 1/4th of the total power). This feature can also be helpful if you’re pairing tweeter and woofer from different manufacturers with different dB ratings.

The other thing I liked here is that all connectors are screw-on – making the connections tight and secure.

As for the other specs, you get up to 300 Watts power handling, 12 dB/Octave cut-off slope, and 3.5 kHz crossover point.

It comes with only a 6.3-inch length and 3.5-inch depth. Such a small profile allows you to place ’em inside door panels without any compatibility issue.

Overall, DS18 Pro-CFX is ideal if you have a simple 2-way speaker system in your vehicle and want a plug-n-play type of crossover. 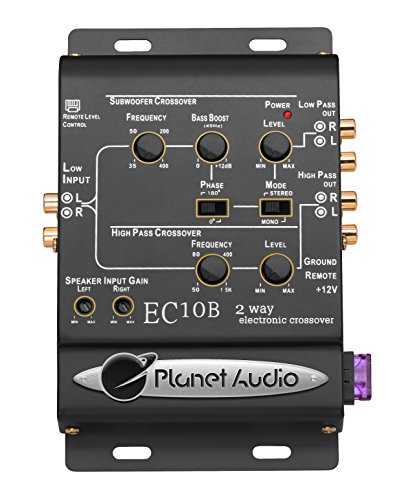 In case you want a 2-way crossover with more controlling options, you can check the Planet Audio EC10B.

Thanks to a variety of knobs and buttons on the top side, you can easily imagine how advanced it is compared to the DS18 Pro-CFX.

You can divide them into two sections: input/output connectors and front/rear channel controls.

The power LED, remote-level connector, and left/right low-pass and high-pass outputs belong to this section. You can find them on the top-front side and right side respectively.

Below these output connectors, we have +12V/ground/remote turn-on terminals and a fuse connector. As for the wires, Planet Audio recommends a 16 gauge wire as the power (with a 3A inline fuse) and ground wire.

On the left side, you’ll see left/right RCA inputs and left/right speaker-level inputs. The latter means that you can connect aftermarket as well as factory stereo inputs into this crossover without any issue.

Another thing I must mention is that, since it’s an active crossover, the input signal going into it should NOT be amplified. Instead, you’ll connect the stereo input connectors directly to the crossover and feed its output to your amplifier.

The second part of the controls is located on the lower area and consists of output level control and low-pass frequency control. These controls are the siblings of the ones we discussed above and are used to control output for the high-pass channel and set the lowest frequency that will pass through it.

In between low-pass and high-pass channel controls, there’s an output mode selector and phase selector. While the mode selector is for selecting either Mono or Stereo signal output for low pass outputs, the phase selector helps in getting the best time alignment and imaging for the sub.

Since it’s much larger than the DS18-CFX, you’ll have to carefully choose a mounting location for EC10B. According to Planet Audio, the mounting area should be flat, relatively cooler, away from heaters and exhaust lines, and less prone to vibrations.

My main issues with this crossover are the extra price compared to passive 2-way crossovers and a less beginner-friendly layout for channel controls. Other than that, it’s perfect to use in a variety of configurations.

In my opinion, the ideal setup for the EC10B would be two monoblock amps and a single 2-channel amp to power two subs, and a speakers pair. 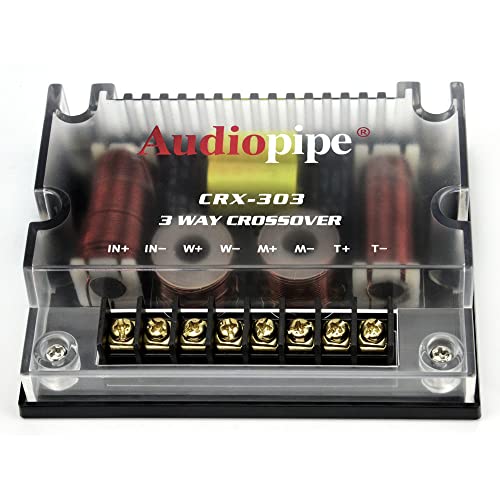 The Audiopipe CRX-303 is a 3-way passive crossover that looks and works almost identically to the DS18 Pro-CFX.

Like Pro-CFX, it comes with a transparent top side that allows you to see the high-grade Polymer Capacitors inside.

One thing I must mention is that the CRX-303 is meant to work with 4-Ohm speakers. It means your tweeter, mids, and subs must be of 4-Ohms type. Many people have reported that you’ll get pops and crackles beyond a certain voltage if you pair 6-Ohm or 8-Ohm speakers with it.

Other things I didn’t like in CRX-303 are the lack of volume control for the tweeters and a slightly larger profile compared to the Pro-CFX.

On the positive side, it’s cheaper, requires no power to operate, and can handle speakers with up to 300W of peak power (150W RMS). 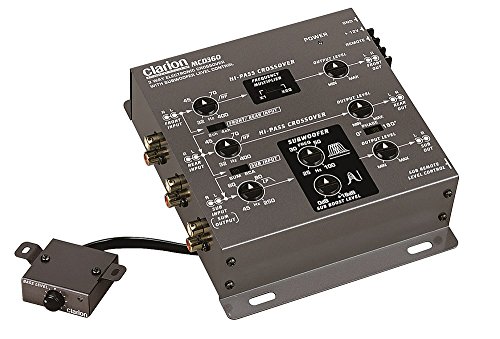 The Clarion MCD360 is 6-channel active crossover that can be used in both 2-way or 3-way modes.

Like the EC10B, it has input and output connections on its left and right sides, and all the channel controls on the front.

The left side is where you’ll find front RCA inputs, rear RCA inputs, and subwoofer RCA inputs. On the right, you’ll get outputs connectors for front/rear/subwoofer RCAs as well as the usual ground/+12V/remote connections. The RCA outputs give you 5V signals – meaning you may or may not require you to use a line driver depending on your setup.

Since we have already discussed most of them in the EC10B review, I’ll not repeat them here. But there are some unique options, such as sub input switch that allows you to direct the audio signal from front and rear channels to sub input if a dedicated sub input is not there.

The main issues you can have with this crossover are the relatively high price and a larger size. On the other hand, you get a high-end crossover that can be used in a variety of car audio setups.

Passive crossovers don’t require any power to operate, and they’re the ones that come with component speakers out of the box. They consist of a few resistors, capacitors, and coils.

They receive a full-range signal sent by the amplifier, filter the unwanted frequencies, and send the remaining audio signal to the speakers. Some of these crossovers have the option to turn down the tweeter volume if you think it’s too loud. Their main advantages are cheap price and easy installation process.

On the other hand, these crossovers are notoriously inefficient when it comes to power management. Since they filter an already-amplified signal, the unwanted part of that signal turns into heat. They’re also not as accurate as active crossovers.

Unlike passive crossovers, active crossovers require +12V, ground, and turn-on connections to operate. While it makes them slightly complicated to install, they provide better signal separation and more control over the audio signal.

They sit between your car radio and the amplifier and remove the unwanted frequencies before sending them to the amp. This way, the amplifier doesn’t waste power on amplifying the frequencies your speakers won’t play. Generally, these crossovers give you volume control options for each of their channels so you can keep them in sync.

One big advantage of active crossovers is the adjustable crossover slope. It defines the rate at which the crossover attenuates those unwanted frequencies.

The main issues you can have with such crossovers are the extra budget and more time duration to install (as you have to manage +12V, ground, and remote connections).

Some people argue that passive crossovers are not needed if you’re using a DSP in your car audio system.

This argument certainly makes sense as DSP (also known as the Digital Signal Processor) gives you the combined functionalities of a hi-lo converter, an equalizer, a crossover, and a line driver.

But you may still want to use passive crossovers, along with the DSP, if you have a lot of speakers sets (2 6×9 components speakers, and 2 6×8 coaxial speakers, for example) and only have a 4-channel amplifier to connect them to.

In such a scenario, the two components speakers can connect with their respective passive crossovers, which will then connect to your amp’s channels 1 and 2. Then, you can use channels 3 and 4 for the two coaxial speakers.

On the other hand, if you solely rely on a DSP for this purpose, you’d need a 6-channel amplifier.

Another reason why you should keep using passive crossovers is the tweeter protection. In case you accidentally send some bass frequency to your tweeter, a passive crossover will filter it out. It can be handy if your DSP/Amplifier’s crossover is malfunctioning for some reason.