An aftermarket amplifier is probably the cheapest way to improve your vehicle’s audio performance, even if you pair it up with your factory speakers.

But how well it performs will depend on its compatibility with other audio components. To ensure compatibility, you need to check the RMS ratings of your amp and speakers, your head unit’ outputs, the number of amp channels, etc.

The number of channels is crucial as it determines the amount of speakers you can connect to the amp.

You can think of a channel as a power source for one speaker. It means a 2-channel amp can power a single speakers pair, and a 4-channel amp is good enough for front and rear speakers of your vehicle.

I like 5-channel amps because they allow you to power our entire car audio system from a single unit. You can use the 1-4 channels for your speakers and the 5th for your subwoofer.

On the other hand, if you use a 4-channel amp for speakers, you’ll have to buy a monoblock amp for the subwoofer – and the installtion will be much more complex.

Contrary to popular belief, not all 5-channel amps are expensive. And depending on your requirements, you can find a good-quality gem under 200 or 300 bucks.

In today’s post, we’ll talk about some of the best 5-channel amps available in the market. 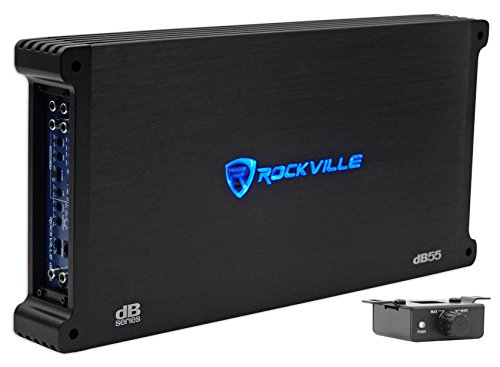 The Rockville dB55 is a simple yet solid-looking budget amplifier.

It comes in black color, and has a brushed-aluminum finish on the top side with a blue-colored Rockville LED for branding. The overall construction looks solid, and I couldn’t find any flex or bend on the exterior.

On one side, you’ll get its five channels arranged in two rows. On the upper row, we have +ve and -ve terminals for channel 1/2 and the +ve terminal of channel 5 (the subwoofer channel).

You should remember this vertical arrangement of channel 5 terminals in during the installation. All of the speaker channels (1 to 4) are bridgeable. You can combine channel 1 to 2 and channel 3 to 4 to have two powerful, bridged channels.

On the right side of these channels, there are three 40A fuses (they come as accessories) and +12V/remote/ground connectors. Rockville recommends a 4ga wire for power/ground connections and 10/12ga for channel wires.

One important thing to note is that whichever mode you choose, you’ll have to set the gain levels for all of the three channel pairs (1-2, 3-4, and 5).

I will not mention the Peak ratings since they’re meaningless in real-world scenarios.

It’s 18.6 inches long. That’s why Rockville recommends mounting it in the trunk area. You also get four screws in the accessories that you can use for secure mounting.

One issue I want to address before ending the review is Rockville as a brand. I know many people don’t consider their amps to be high-quality. They argue that those amps don’t provide as much power as advertised and get blown if overpowered.

If we talk about this particular amp, the headline on the product page is slightly misleading. It leads some people to believe this is a 4000W amp, not a 1000W amp.

In reality, 4000W is the peak power and can only be achieved for a split second. The power it can deliver for a continuous period, called RMS, is 1000W.

Performance wise too, it works perfectly for a 1000W amp – except for a little overheating. Even then, Rockville does offer a 90-day money-back guarantee if you’re not satisfied for any reason.

Therefore, I suggest you check it out if the budget is tight and your speakers/subs don’t require too much power to operate. 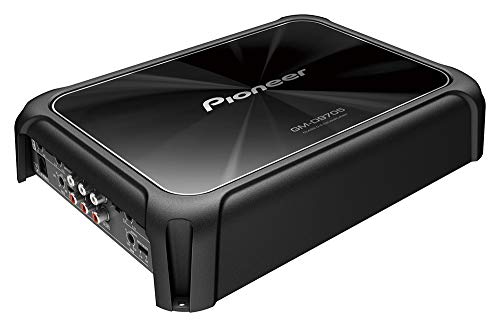 In case you feel the dB55 is not powerful enough for your subwoofer, you can try the Pioneer GM-D9705. It comes at almost 300 bucks, so you can consider it a minor upgrade over the former.

With 12 inches in length, it’s noticeably smaller than the dB55 – meaning more compatibility as far as the mounting locations go.

The outer shell is thick and has a glossy finish on top. But the lack of any LED around the logo and round corners make it look a little old-fashioned.

Internal components are solid too, and you can see the capacitors assembled carefully.

The amp controls and settings are on the front side, while the terminals are on the rear.

One thing you should notice here is the arrangement for channel terminals. Unlike other 5-channel amps where you get -ve and +ve terminals for channels 1 to 4 located in two rows, this one has all of them in two blocks (channel A and B) of a single row.

Each of these channels consists of left/right parts, and each of those parts has two channels (+vs and -ve). Furthermore, the arrangement of those terminals in both channels is +ve, -ve, -ve, +ve (from left to right). You have to keep this arrangement in mind during the installation process.

Unlike Rockville which is a hybrid Class AB+D amp, the GM-9705 is a typical Class D amp that allows it to be more power-efficient.

Other specs include 10Hz-50,000Hz frequency response and an S/N ratio greater than 94dB.

You can find both of them inside the accessory package. Lastly, there’s the 1-year warranty.

The document is not as detailed as I expected. While it’s not a dealbreaker, you can face some installation issues if you’re a beginner. The second issue is also related to the installation. And that is the down-angled inputs. Again, they can make your task lengthy if this is your first time.

Lastly, the power and protection LEDs (that indicate whether or not an amp is in protect mode) are combined into one.

If you can live with these trade-offs, the GM-9705 is the best 5-channel in the under-300 price category. 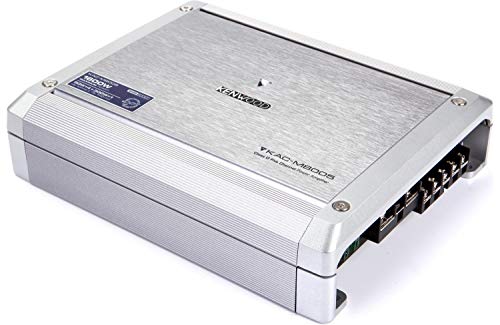 In case you don’t have much space inside your vehicle and want something compact, there’s Kenwood Kac-M8005 for you.

The first thing you’ll notice in this amp is how small it is. With only 2 lbs weight and 8.27 inches length, it’s quite ‘tiny’ for a 5-channel amp. And you can easily pick it up with one hand.

Even the color scheme is different than what we get in other amps. Here you’ll get the grey-colored exterior for the most part, with only the connection and wiring area in black.

The layout is just like the other amps, however. You get three 30A fuses, +12V/ground/remote connections, and speaker-wire terminals on one side.

The crossover controls, gain control, bass boost, and RCA connectors ( signals between 200mV and 5V voltage are accepted) are on the other side. These controls and RCA connectors come with rubber protectors that give them good resistance against the water in case you use this amp for a boat.

One thing I liked in Kac-M8005 is that you can use speaker-level inputs to the RCA connectors if you’re using a factory head unit. All you need is a speaker-to-RCA wire adapter. And what’s better is that you don’t even need a remote turn-on wire for this connection. The amp will automatically sense the signal from speaker-level input wires to turn itself on and off.

Other specs include 20Hz-20,000Hz frequency response and 80 dBA signal-to-noise ratio.

As I said earlier, the main argument for M8005 is its compactness. Therefore, you’ll have to check out other amps on this list if you’re looking for something powerful.

Sure, it can drive most of the speakers/subs in the market. But don’t expect SPL-level bass from it. The other thing I didn’t like about this amp is the higher price – especially when you compare it against the Rockville dB55.

In most car audio upgrades that include four speakers and a sub, you get two options for the amplifiers. You either go for a 5-channel amp or a 4-channel for speakers + a monoblock amp for the single sub. There are advantages and disadvantages of both of these approaches. And the route you take will mostly depend on your preferences.

The main advantages of a 5-channel amp are ease of installation, less required space, clean wiring, and lesser cost compared to a 4-channel + monoblock combo.

On the other hand, two different amps give you much more room for customization and better flexibility for future upgrades. Some folks argue that the subwoofer channel of 5-channel amps isn’t powerful enough for heavy-duty subs. That’s why they go for a dedicated monoblock amp.

What are 5-Channel Amps used for?

The common configuration for a 5-channel amp is four speakers and one sub. But you can increase the number of speakers by using crossovers. This way, you can use a component speakers system on the front, a coaxial speakers pair on the rear, and an 8-inch sub (or 10/12-inch if it’s compatible).

How many Speakers Can I Run on a 5-Channel Amp?

By default, it’s 5. But you can increase the total count to 7 by using component speakers and crossovers on the front, as we discussed above.

How to Bridge a 5-Channel Amp?

How Many RCA Cables for 5 channel amp?

You’ll need 3 RCA cables for the front/rear speakers and the sub.