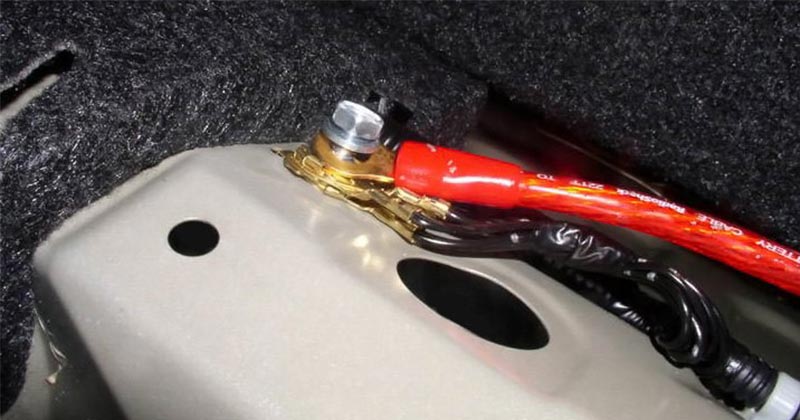 Car amplifier grounding is a process that we follow to minimize the risk of electrocution. It’s done by making a ground wire connection from the amp to any metal surface of the car’s body.

But if you have installed the amplifier of your own, there is a chance of you not making a proper ground connection. And even if you made a stable connection in the first place, it can get loose over time, making it weaker.

Bad grounding is one of the major reason an amplifier doesn’t perform up to the mark. In some cases, it doesn’t allow the amp to turn on, causing long-term damage, or in some rare cases, can even cause a fire in your vehicle.

As you may have realized, this is something you shouldn’t wait too long to fix.

Jump Ahead hide
Bad Grounding on Car Amp: Common Symptoms
1. Amplifier Clipping
2. Amplifier Overheating for No Reason
3. Amp Repeatedly Going into Protection Mode
4. Other Lesser-known Symptoms
How to Prevent Bad Grounding on Car Amp
Frequently Asked Questions
How do I know if my amp ground is bad?
Can a bad ground cause clipping?
How do I find a good ground in my car?

But how can you tell if the amplifier is having a bad grounding in the first place?

Bad or improper grounding is commonly associated with amplifier clipping, amplifier repeatedly going into protect mode, and overheating. Below we’ll discuss each of these issues in detail

If you’ve ever seen the graph of an audio signal, you’ll know that it represents a sinusoidal wave with some peaks and some troughs. But if the amp is clipping, it produces flat peaks and troughs that result in distorted sound on certain frequencies.

Clipping happens when your amplifier is trying way more than its capacity to match the power your speaker(s)/sub(s) are demanding. And although there are many other reasons why it’s happening such as too high amp gain, inadequate amp gauge wire size, and overheating, you should check for amp grounding as well.

2. Amplifier Overheating for No Reason

Another common symptom of bad grounding is amp overheating.

It can happen due to many reasons such as poor ventilation, using a low-quality amp with powerful subs, loose wires, or continuous usage (for hours).

None of them is a serious issue and you can solve each of them with just a little bit of effort.

If the amp is overheated due to poor ventilation then relocate it to a less-congested, airy area of the vehicle. And if there’s load mismatch, you can check this guide to match subs’ RMS/impedance to that of amplifier.

But if you’ve double-checked everything and there’s none of these issues, there’s a high chance of bad grounding being the culprit.

Many amplifiers come with a protection mode. This is a built-in feature that automatically activates in case of malfunction to prevent internal damage.

I have already discussed the protection mode in great detail in a separate post. In simple words, the amp can go into protection mode due to multiple reasons such as load mismatch, amp overheating (that we discussed above), malfunctioning speaker/head unit, or internal failure.

If your car audio setup has none of the above issues and the amp’s still repeatedly going into protect mode, then it’s a strong sign of bad ground connection.

While the above three are the most common symptoms of a bad ground connection, there are some less common signs as well:

How to Prevent Bad Grounding on Car Amp

Like said earlier, you should make a connection with the metal surface of the car chassis. You need to make sure that the connection is touching the bare metal instead of any paint or rust.

You may also need adhesive or screws to lock the ground wire in one position.

Alternatively, you need to find a bolt attached to the car chassis and is located less than 18 inches away from your amp. If you can’t find a bolt within that range, the only option you’re left with is making a grounding point by drilling into the chassis and making a hole for the bolt.

The second method is my favourite because, while being lengthy, it provides a secure and tight fit. And you won’t need any adhesive for this.

The Sonic Electronix has made a good video in this regard that you can check out below.

How do I know if my amp ground is bad?

If your amp is cutting in and out, or restarting repeatedly, it indicates poor grounding. Other symptoms are whining or popping noise.

Can a bad ground cause clipping?

Yes, the bad grounding can cause clipping since the amp is unable to deliver the power your car system is demanding. You can solve this issue to some extent by playing music at lower volume.

How do I find a good ground in my car?

Any metal surface in your car (with no rust or paint) can be used as a grounding point.